Today we went to Mkimbizi.  Mkimbizi is one of our SACCOS located in a “suburb” of Iringa.  Unlike Nduli, where we were yesterday, 90% of the members of this SACCOS are in business with only a few farming for a living.  The SACCOS here is called Jenga Mkimbizi SACCOS.

When we got to Mkimbizi we discovered that the meeting was called for 10:00 rather than 9:00, as we had been told.  Since we had some time on our hands, we went for a short walk past Alfayo’s Internet café.  Alfayo is a young man we met in 2005 (see our first blog), who now has a business in Mkimbizi.  His Internet café was closed for remodeling.  We continued on our walk until we reached the home of our intern, Peter.  Actually, it's the home of his older brother, who is married, with a family of three.  His brother is a policeman in Iringa, but he is also in the egg business, and we got to see his 700 laying hens and pullets.

When the meeting finally started, only 14 members of the SACCOS were in attendance.  Meetings here are best held on weekday evenings since most members are “in business.”  We had come today for a number of reasons knowing that the turnout would be low.  Enoch gave a talk on the various ways to improve profits.  He covered a number of topics, giving examples and eliciting smiles.

We moved on to doing interviews.  First we talked to Matrida Sanga, 63.  Matrida is married and has 7 children and 9 grandchildren.  She is supporting one of her nieces who was orphaned. She borrowed $125 to buy yarn to knit sweaters with her knitting machine.  After selling the sweaters she repaid her loan and paid the first term fees for her niece.  She used to sell her sweaters to schools but is now starting to sell to dukas.  She is planning on getting another loan so she can do more sweaters.

Sarah Muambene, 49, is married with 5 children and 2 orphans who live with them.  She raises chickens.  She is the one who borrowed $250 to buy chickens.  After repaying her loan she expects to earn $750/year from the eggs.  She is using her profits to help support her family and send her children to school.  (She has already used profits from an earlier loan to send her oldest to college.)

Simon Kinyafu is a 47 year old widower.  His wife died in an accident 7 years ago leaving him to raise their 3 children.  Simon is a carpenter.  His main business is building furniture.  So far he has taken out two loans to buy materials and equipment to expand his business.  He has been able to earn a 60% profit on his loans.  He now wants to get a third loan to build furniture that he can sell to a duka.  He tells us that with his profits he has been able to pay his children’s secondary school fees, expand his business, and add to his savings account at the SACCOS.

After our interviews we went over to Alfayo’s house.  Alfayo had spent his morning working with street children and writing up reports on each of them.  We are very proud that this young man counts us as his friends.  Orphaned at age 7, he traveled from Zambia to his mother's home in Iringa.  After a failed attempt to find any remaining family members, he made friends at Sunday school with children from the Huruma Center Orphanage.  Through industriousness and work, he finished college and now has his own business. He spends his weekends helping street children from problem homes or those without homes.

When we got back to town we went to pick up another safe for delivery on Monday.  When we arrived at the shop it was closed.  Since we had been told yesterday that the shop would be open today, we called the manager, who arranged for someone to open the shop "in five minutes".  After a forty five minute wait (and several more calls) someone arrived to open the shop.  The safe was loaded in our vehicle and Tom headed for home.  (Sandra had walked home since there were errands to do on the way.) 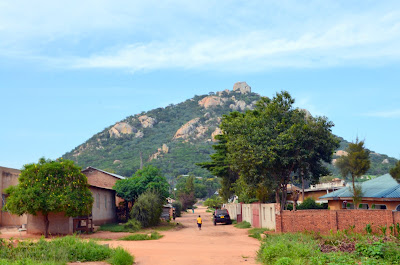 Mkimbize is in the urban area of Iringa. 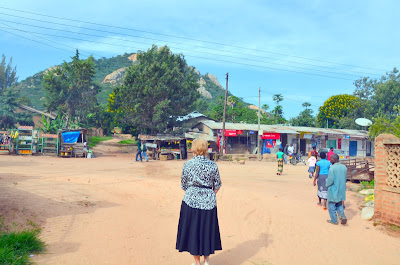 Since we had time we took a walk around the area. 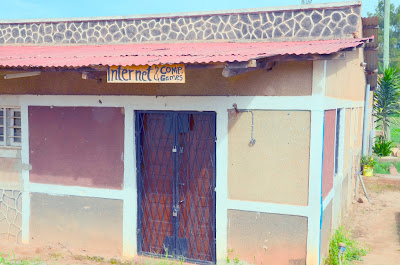 We stopped by Alfayo's Internet cafe.  It was closed for remodeling. 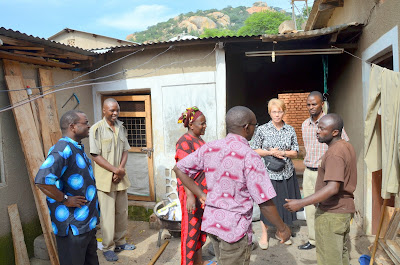 We went over to where Peter (our intern) is living with his brother's family. 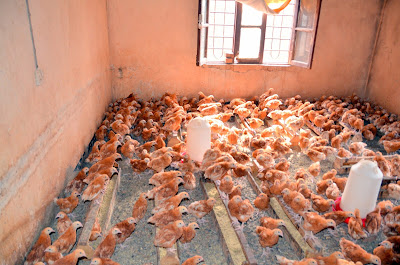 They are raising chickens. 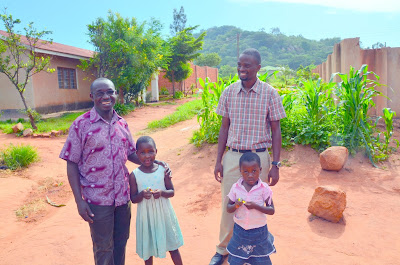 On the way back Tom had to stop and give out candy. 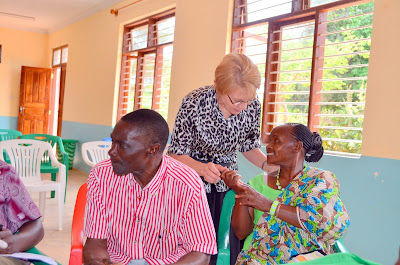 Finally the meeting started and we gave out pens. 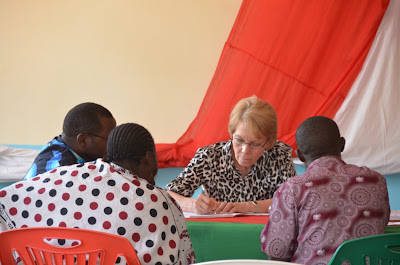 After the meeting we conducted member interviews. 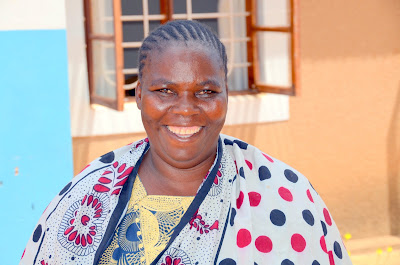 Sarah Muambene, 49, is married with 5 children and 2 orphans who live with them.  She raises chickens. 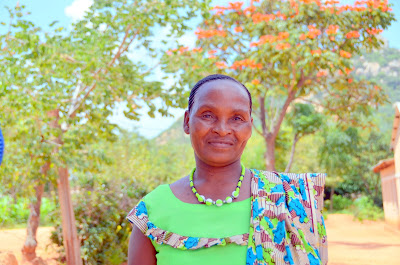 Matrida Sanga, 63, is married and has 7 children and 9 grandchildren.  She is supporting one of her nieces who was orphaned. 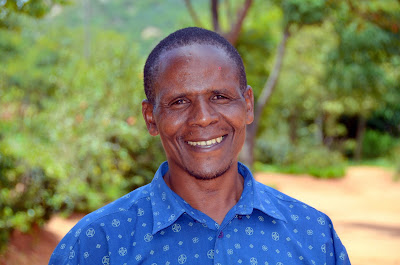 Simon Kinyafu is a 47 year old widower.  His wife died in an accident 7 years ago leaving him to raise their 3 children.  Simon is a carpenter.  His main business is building furniture. 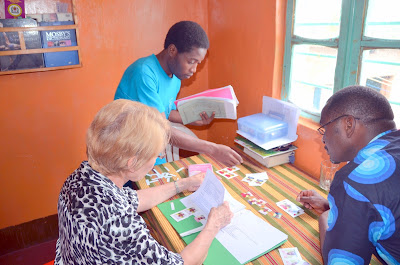 Alfayo showed us the records he keeps on the street children under his care. 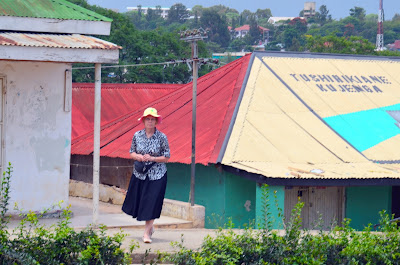 When we went to pick up the safe the store was closed!